This is Nadine Nozakis entry for the Bloggers Mix n Match.

You can find the details of this idea of here at Vint Falkens blog:-

I enjoy reading, I read news, gossip and much about SL on a daily basis yet this topic made me think, what to write about. I mean what is a magazine?

2.Detachable ammunition holder enabling multiple rounds of ammunition to be fed to a gun.

3.A periodical publication, generally consisting of sheets of paper folded in half and stapled at fold.

I'm pretty sure that even though I'm a fan of guns in SL, and carry on Zoes tradition, as I'm a girl with gun, that not the topic for this blog, it's the third meaning. As the works changes zine are as well. There are mainly two big types of magazines out there now. News and others on of the biggest running magazines in SL is the Avastar, even if it have been closed, it still much what formed the news around second life.

Today I see the news flow dominated by Hamlet and his New World Notes , and Tateru writing for Massively.

Neither of these are magazines in the traditional meaning. They are public stories more like a blog, when ready and the news value is there, something on the other hand you can see major magazines turn into on the web side.

The other form that is growing now is big nice fashion magazines, such as Glam and Runway. These are nice web publication at about 100 pages each. Nice layout nice images and the really nice glossy paper feel, however I miss reading them in my google reader.

Even given that the fashion magazine can be a nice long relaxing read, and gives some great ideas both in photo and dressing. The art in many of the more stunning outfits and dresses is quite awesome, but must be kept to the look like normal super models. Maybe as I'm a vampire it's a little strange. Maybe it's just a part of the fashion industry as such.

Once I meet a boy who was planning on making a paper, now one hears very little of it. Now it's more modest in that area probably to do with the economy slowing down. Lets look at an example.

New World Notes, main writer Hamlet Au. This is one of the major sources of news in Second Life, Hamlet keeps following many different aspects and also have contact with some of the Lindens feeding us with comments and information from the inside.

Hamlet makes the publications much like a blog like the major web-newspapers. The pace is usually about two three stories a day. 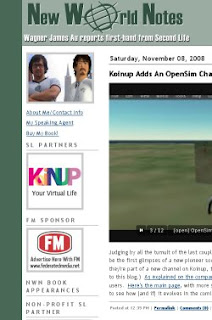