My Visit to Reaction grid

This is my fourth blog post on a visit to an OpenSim based Virtual world.

Reaction grid is a rather large and growing Grid, so there is no way I could really visit everywhere, and see everything, even with multiple visits, it's also PG rated so it's safe to login with your grandmother (if you can get off that dance pole in SL).

They recently had their 3000th user account, ok that's not big compared to the massive millions who have set up accounts in SL, or even the 21000 for OSgrid, but it's a steady growth pattern, but then again it's not the sort of business where you want an population explosion that you can't handle.

Reaction Grid is one of the more commercial and professional of the OpenSim providers. In that it actively seeks out markets, and promotes itself as an alternate to
Second Life. They do seem to be growing quite well, and have just had Microsoft move in from Second Life.

Reaction grid are very pleased to say they run it all on Hyper-V on 2008 Windows Server using SQL Server 2008, so I guess Microsoft are going to where their own technology is being used.
They are also Partners with ESRI, and if you have ever worked with GIS (Geographic information systems) products, you know that ESRI is considered the number one application by many people.

They have also released they own private Grid for business Service called Banbury, in competition with the Linden Lab Enterprise.

This post is not going to be very up
to date, as they are such a moving target, it's hard to keep up with them (shakes tiny fist). They not only work with OpenSim itself, but a product called Unity 3d, hopefully to bring a web based interface to OpenSim. I tried it once during a early test, potentially it should be able to import avatars from poser, Daz3d, and other modelling software.

I suspect the grid is in one data centre, this should hopefully help with Sim crossing.

The Website is very helpful, and has lots of information, on who they are, where they are, and how it all runs.

First thing to do is to create an account at the Reaction Grid website, you have 6 choices for your initial avatar. It would be best to try out the Hippo Viewer, as it should have the Reaction Grid Settings in it's Grid Manager

Here is a pic of the Login point, on the raised platform in the background, there is a screen to show you who is inworld.
You may notice the large red emblem on the
ground, it's that of Reaction grid, This place is set as your home location, so if you get lost, click on the Home on the menu to return here. As you can see the Avatar is better than the basic Ruth you get on most OpenSims.

This is the Teleport centre, the picture is not clear enough to show you what is written on them, sorry.

I first visited the RGshop which didn't seem to be there?? Hmmm


So we have a rather large Oriental styled house..lets go in...

It's big...yes it's quite big inside

Lets go into the Information building, that the one straight ahead, on the end of the bridge.
It contains a large amount of posters and displays of the 1939 Worlds Fair


The next three pictures show the Hemispere. A circular structure, with a long spiral path to walk along...but I would rather fly instead.

A large dome with a Jack o lantern was on display. Aparently this is how it actually looked when the fair was on

OK, there is more, but I decided to go check out some neibouring area, I flew across to the next region Code Torque and took snapshots.

They have plants here, you know if this was SL, it would grab you and try to drag you under.

Crossing regions was quite good, except when I seem to have hit a corner of 4 sims, and got stuck. The only way out of this is to TP home, Which didn't work this time
so I logged out.

Logged back in and TPed to Gridizens market, one thing I have notice is all these little one person boats everywhere. I had a short go in one,they work fine, I was just wondering why they are there? I am also wondering where my picture of them went, oh well never mind.

The market is quite small but it has a Few Scripts, Animations, and furniture and items. Hmmm OK, lets go back to Home

My next randon choice to see is Elf Clan, and it seems to be fairly close to what I remember in SL.

Around this time I thought to myself I should put my draw distance to maximum...and then I noticed I hadn't really been TPing very far.
As below is the view above the Home point

I think this is the Master Control room.

The overwhelming feeling is that crossing regions is so good, although I always seem to have the habit of crossing where 4 come together, and getting stuck. (So don't do it, ok?)

With the increased in draw distance I realized how much I missed, but I was travelling very slow, it's a business laptop, with a average video card :-).

On my second visit I dropped in on Trever Meister who was working away on his land, who was nice enough to talk to me, and show some of the items he has created. His main interest in OpenSim is how it can be used in education

On my 3rd visit I just imported my Avatar settings via Meerkat, and strangely felt much better, and taller, and just a bit err, you know..bustier :-)

I then started to fly randomly, and found myself approaching a Gas Giant

I seemed to have found someones plans for a housing estate. This would be a good idea. First create your houses, and estates, and get is all sized up.

On a random Map selection I found the Grid CSI department.

I wonder if anyone has told Desmond Shang he has a Caledon outpost here?

Now here I came across Cube3, who make the Spaceships in SL, he has been rather busy!

I'm trying to sit down, but I guess this is some sort of anti-theft device.

Possibly I should have brought a date, but there was no movie showing, I suspect Sci-Fi may be a popular choice.

CAn I have some Popcorn please? Anyone.

On my fourth visit I looked at the Map and did some random jumps, and then i found the Hypergrid...not having tried the Hypergrid I gave it a go and ended up on Virtual Recovery.

It was not very big, just 4 -6 Regions, so I had a quick look around
and them went back to the login point, and stayed there, while clicking
on the ground, the air...and couldn't see how to get back or go
anywhere else... so I logged out.

I logged back in again, and just did another final map jump, and found myself here. I have an idea what it's all about. But I am still amazed at the things that people create

And this is when I logged out. I do belive that Reaction Grid is going to be one of the frontrunners for a viable OpenSim environment.

Microsoft in ReactionGrid on Flikr

Pachube is a site/system that bring sensor data to the public. I belive it can be directly written into a Database, this can then animate objects in OpenSim

Karl G is on twitter as http://twitter.com/Dr_Manhattan and as
far as I can tell, he's having a great time, and enjoying what he does.


The number one benefit of information technology is that it empowers people
to do what they want to do. It lets people be creative. It lets people be productive.
It lets people learn things they didn't think they could learn before, and so
in a sense it is all about potential. - Steve Ballmer
Posted by Shockwave Plasma at 11/29/2009 09:15:00 pm 4 comments:

My visit to Rezzable Grid Alpha

This is my 3rd blog post on visiting OpenSim Grids.
Today we visit the Rezzable Grid Alpha.

At one point Rezzable had 40 Sims in Second Life, as you can imagine this does get a bit unwieldy and expensive to manage. These issues plus lack of control of the actual content, and then OpenSpaces issue (as detail by Zonja Capalini), lead them to explore using OpenSim.

Firstly you will need to sign up to get a Rezzables account to visit the Sim at http://rezzable.com/user/register
After you have Registered, you can go to this website

and follow the instructions, on how to get connected.


It's a bit different to other grids I have visited, as you need to download a launcher from the website, this will ask to start the SL client, passing across the grid settings and allowing you to login to the grid. I guess this is to make it as foolproof as possible.

Once you have downloaded the launcher, click on the Red Private Grid Button again, this starts the launcher, you will probably be asked by your PC, if you want it to run, so say yes, and the SL client should automatically log you in.

TADA!! You should now be on a giant table, and being Ruth. On the table is some free skins and clothes, there is a AO being offered, but it doesn't seem to want to hand it over to you. 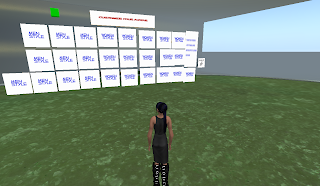 If you remember Greenies, and I'm sure most people do, then it will be very familiar to you, but no vehicles, no flying saucers, and no cockroaches. 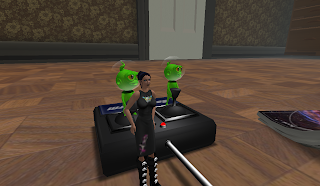 I've not found the beach here, but the doors and windows are locked. 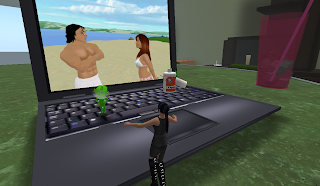 Coke on the table top, and no one has cleaned it up yet. 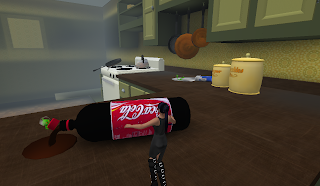 Quick..someone..anyone, throw him a life jacket, or a Pea from the Fridge! 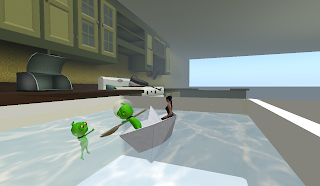 He must be totally full of Coke over there. 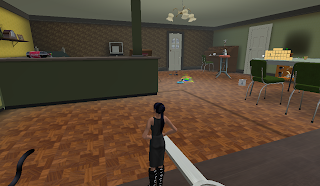 When we can turn on "Damage", I think behind the Iron would be a great place to snipe from. 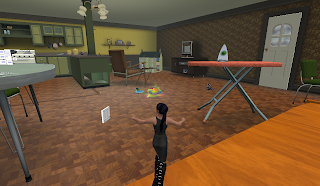 Greenies is unusual as it's actually lots of space. It's not crowded with items that are trying to grab your attention. When flying around, it does take awhile to realize just how much space is free. 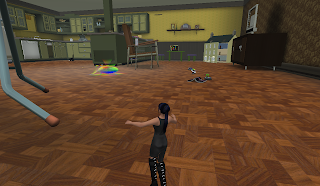 This is just the current iteration of the Rezzables Grid, remember they had 40 Sims worth of content, such as Crimson Shadow, Black Swan, the Dinos.
If you enjoyed visiting them in Second life, it might be appearing here one day.


“I think the idea of virtual worlds will not be a dead-end novelty as long as the software gets better with less bugs and continued development, and enough people in UK education see the potential and create examples of virtual world experiences which can be shown to positively benefit the users.”(Lindsay Da Silva)
Posted by Shockwave Plasma at 11/14/2009 01:30:00 pm No comments: