Why the Zombie apocalypse will not be in the USA 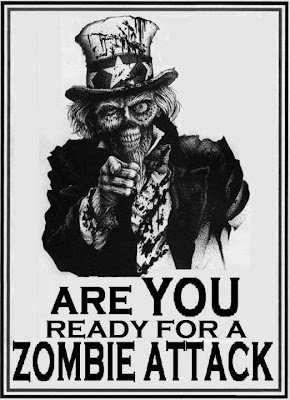 You know it's going to happen one day, maybe not soon, but when you least expect it, the zombies will attack. You might be out minding your own business, when suddenly.... out they come, on the endless hunt for human brains. 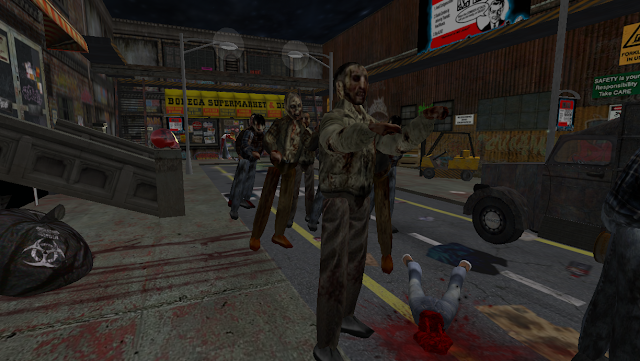 Sods law will then dictate that your not going to be suitably dressed :-( 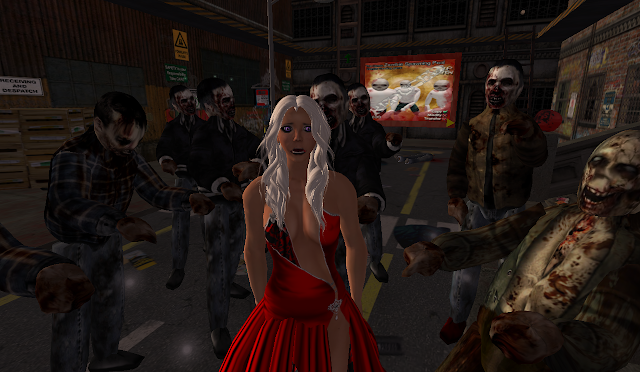 If I was in the USA, this wouldn't be much of a problem as I would also be suitably armed. Instead I will just have to climb on things and scream.... 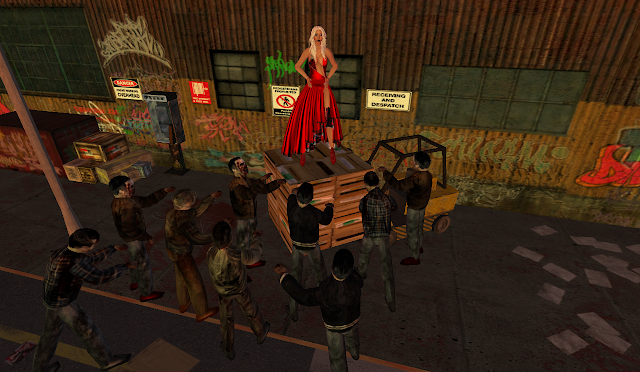 Yes, the long flowing red dress is wonderfully sexy, but all you need a one zombie to grab hold of it and your done for! 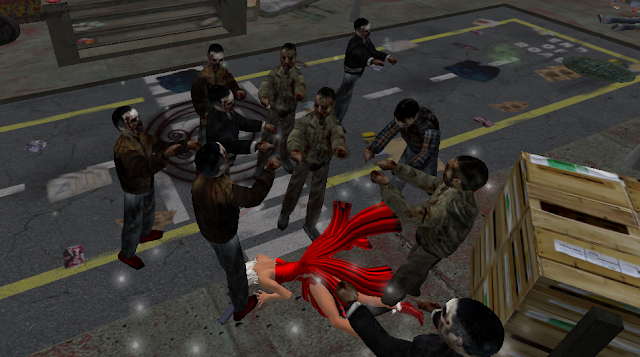 Getting your clothing right is seriously important.

So I have decided (after much thought) that slim fitting jeans, long sleeved top, and boots as high as you can get them is the ideal survival outfit.

I'm sure that everyone would agree, there is nothing worse than a severed zombie hand climbing up your leg....well...there is one thing...

Boots with straps or laces is a definite no no as they are just a climbing frame for zombie hands, and you don't want hands climbing inside your trousers.

Notice I still have the 5in heels?  Zombies aren't fast, but they are persistent, and if it starts to get really desperate, standing heavily on one of your companions feet will give you those extra minutes to escape as they slowly limp after you until they fall into the clutches of the undead horde.

I think it's quite reasonable to suspect that when the zombie apocalypse happens, it's going to happen in Australia or Britain or anywhere where people aren't well armed. Looks like the USA is safe in that regard.

USA citizens are well equipt to deal with zombies due to their possession of large caliber pistols. My experiments have shown that firing two pistols at the one target is much better than trying to shoot different zombies at the same time. 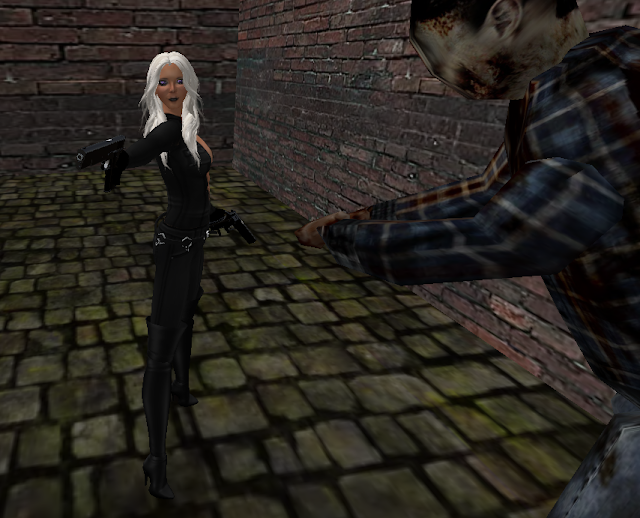 Armalite rifles are as common as brooms in the USA (so I'm told) and are able to put down the zombie attackers very quickly. 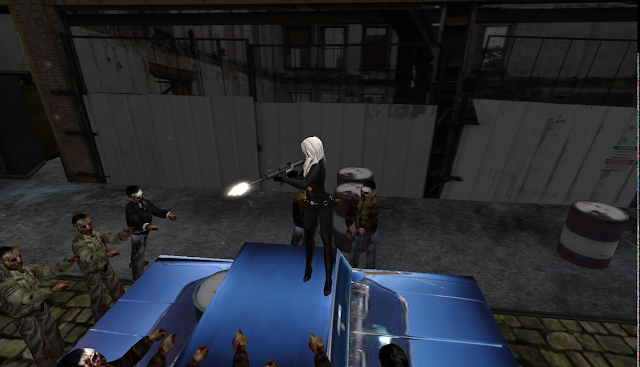 So you see,Australia is perfect as a target for the zombies as firearms are quite restricted and the means of dealing with the zombie hordes are much more limited.


How can we deal with Zombies in Australia?

We can legally own Archery gear...yeah, bows and arrows...although in my tests it takes ten arrows to stop one zombie, and by that time...well...your going to need a lot of arrows, and I strongly suspect trying to reuse them... IS A REALLY BAD IDEA... 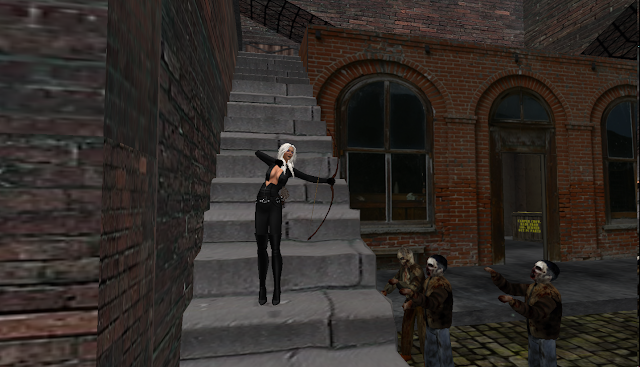 There is always the traditional weapon, the axe, I guess it's good enough for Abe Lincoln...but really ickkkyyy as you have to get up close. 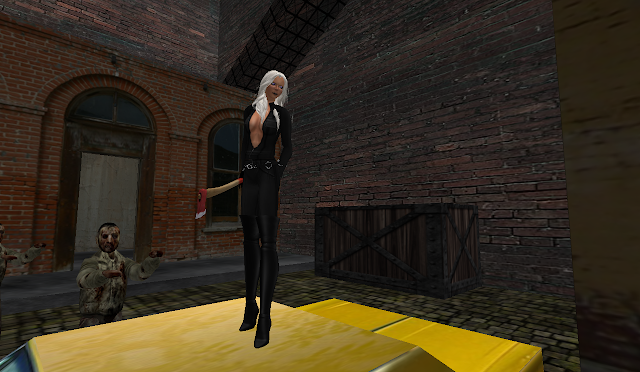 Desperate times make desperate measures, and a bat is a true sign of desperation during the zombie apocalypse. 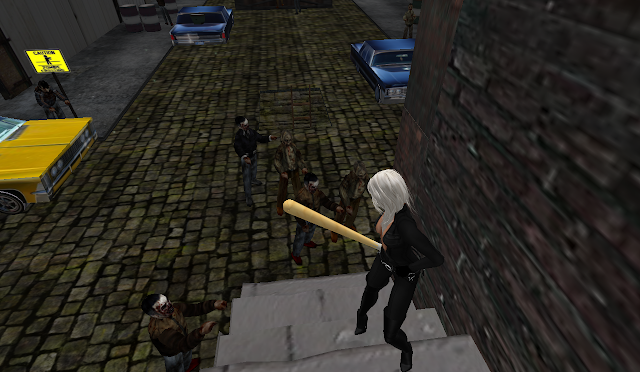 How could I forget the traditional chain saw? Much more effective than the bat or the axe, but yeah....icckky zombie bits everywhere...this led to serious hair cleaning, and the noise, and the fumes where just awful. But hey..100% effective. 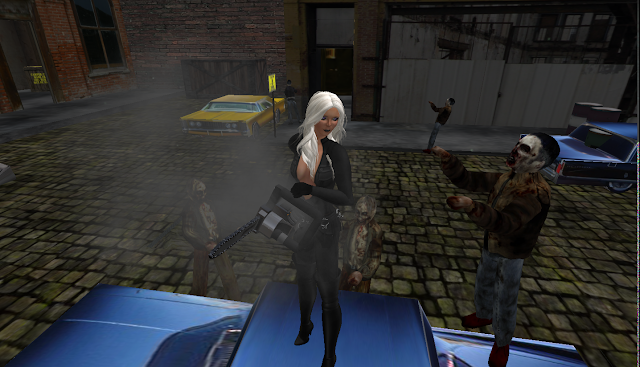 Last but not least in the Non-Firearm anti-zombie arsenal is the Molotov Cocktail. 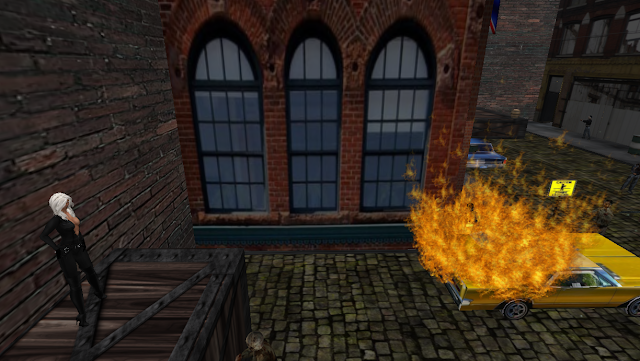 Oh Bugger........Just be careful when throwing them, they are not toys...OK 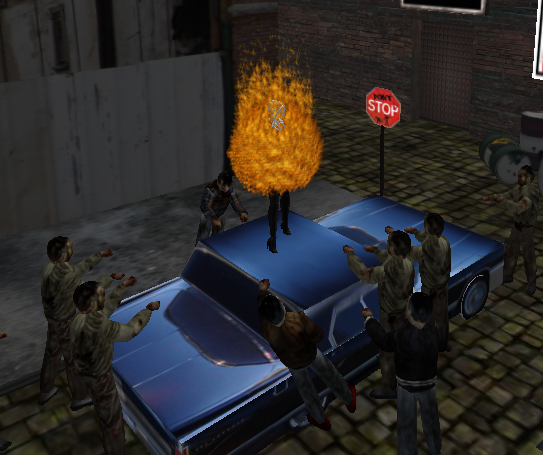 So basically Australia is a goner in the case of zombie plagues, the only chance for residents is immediate quarantine, and possible "sterilization" of the area.

Further help on preparedness for the zombie apocalypse can be found at:

Very USA based, but entertaining is Guns and Gardens whose motto "Survive and look cute" I have taken to heart for this post.

Robert Smith of the University of Ottawa has modeled the results of a Zombie outbreak, and the results are quite bad. Unless the Zombies are destroyed quickly, it's just a matter of time before the entire human race is quickly infected. Only those is remote outposts and towns such as Mount Isa, Alice Springs and Outback stations will survive.Britain is pretty well stuffed due to the high density living.

Thanks to Drag0nista for the discussion on the overwhelmingly important topic of what shoes to wear for the zombie apocalypse.

Thanks to Moggs Oceanlane for making me aware of the unique dangers with zombie survival in Australia.


“Indeed, one concern would be that the initial neoconservative response to a zombie outbreak would be to invade Iraq again out of force of habit.” ― Daniel W. Drezner, Theories of International Politics and Zombies
Posted by Shockwave Plasma at 6/26/2012 10:57:00 pm No comments:

Looks like the Australian Govt really wants these mercenary Missionaries in Australian schools.

Chrys Stephenson has turned on the ChrysSignal and we need to get this done.

This is urgent. It would be great if everyone could get behind this today and promote it to your own networks. This is the time to mobilise folks.

The Federal government announced last night they are going to pass legislation to circumvent the High Court ruling on funding for the National School Chaplaincy Program. This is a cynical, underhanded move which, I imagine, won’t impress the High Court at all. It is not at all clear that this attempt to snub the ruling won’t end the government back in the High Court, but we have to wait to see their legislation first.

What we can do immediately, although it won’t overturn the legislation, is try to get the Greens to stand up in Parliament and oppose it – or at least demand amendments to the program. This will get publicity about what is going on and shine a spotlight on what the government is doing. But we need *you* and your networks to help.

As a matter of urgency, please send an email to the following list:

Here is a sample letter. You can use your own words if you like, but please use the three dot points as they appear so we present a cohesive message.

Subject: Funding – National School Chaplaincy Program
Dear Senators and Mr. Bandt
You will be aware the ALP are planning to rush legislation through parliament to subvert the High Court decision in Willams v the Commonwealth and Ors.

This is an opportunity for the Greens to hold the government to account. The High Court has made a ruling which provides a greater level of public accountability and now the ALP – undoubtedly with the support of the coalition – intend to circumvent that ruling through legislation.

This is an opportunity for the Greens to make a public stand for some incredibly important issues, including public accountability, separation of church and state and our children’s right to a secular public education system.

I would be grateful if the Greens would represent my views in respect to this matter. They are as follows:

1) I do not support the Howard-Gillard program that supplies chaplains of any faith in Australia’s public schools, and I urge you to prevent the continuation of chaplains in today’s forthcoming legislation.

2) If we are to have Commonwealth assistance supplied to schools in this manner then I am firmly of the view that they must be fully qualified as school counsellors, which means they are qualified teachers with a degree in psychology and postgraduate qualifications in school counselling, and nothing less can do.

3) It is time to stop outsourcing this work to third party contractors and these fully qualified school counsellors must all be employed as public servants in the relevant Education departments in each state and territory in order to ensure some high level of confidence in their training, integrity and the outcomes.
Yours sincerely
————————————

Lisa Brown and Vaginas plus another VAGINA

**Warning this blogpost has words considered unacceptable for  GOP members**

So it's been a big couple of  days on the vagina front. The US states are continuing their war on womans bodies, this time they decided that Lisa Brown couldn't actually say the "V" word, you know the Vajayjay, the Lady Garden, Satans coin purse, the Jeremy Hunt.

Then Jim Stamas the Leader of the House banned her from talking for two days.

You can see the speech that got her banned on YouTube:-

Lisa Brown talks about it in her own words here at the Guardian, and on her website.

Barb Byrum was also silenced, as she might have also said the "C" word, you know "contraception", she has a video here of her and Lisa Brown, at a quick ad-hoc press conference


Twitter on the other hand, had great fun with the #vaginamovies hashtag yesterday.
Such as
"For a few Vaginas more", "The Vaginas Strike back" "Little Red Riding Vagina"

Remember this strange piece of Puritanism from Florida in March last year?

At one point [Rep. Scott Randolph, D-Orlando] suggested that his wife "incorporate her uterus" to stop Republicans from pushing measures that would restrict abortions. Republicans, after all, wouldn't want to further regulate a Florida business.

...the Speaker believes it is important for all Members to be mindful of and respectful to visitors and guests, particularly the young pages and messengers who are seated in the chamber during debates. In the past, if the debate is going to contain language that would be considered inappropriate for children and other guests, the Speaker will make an announcement in advance, asking children and others who may be uncomfortable with the subject matter to leave the floor and gallery.

This led to the creation of the website http://incorporatemyuterus.com/

This is so really weird, and I shows the GOP war on woman, is real. I wonder how long before the Womans Protection Service I made up for my last comic become reality?

So in response to this attack I have decided to form "Virtual Avatar Girls In North America", and as I don't live in the USA, and I can think of noone better to head it up than Botgirl Questi.

So...
Dear Botgirl,
Please accept my nomination to head up VAGINA 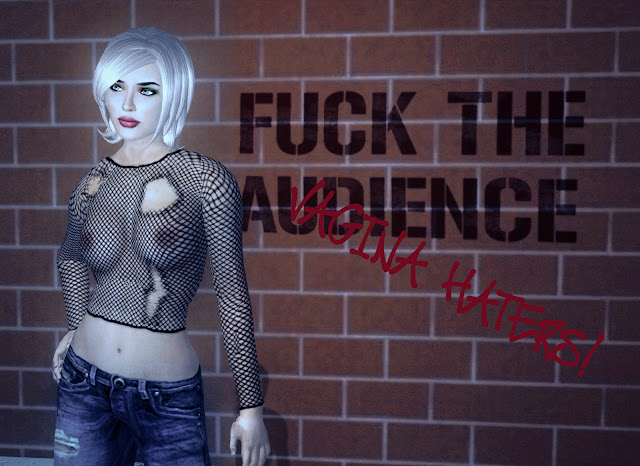 In 50s and 60s America, the future looked bright and shiny with clean Atomic power, the promise of flying cars, space travel, and jet packs. Everything would be cheaper and people would be working less, as we would have robots to do it all.
I guess the working less part has come true with all those jobs being off shored to China, but the rest has been a bit of a failure.
Many advertisements of the time still showed women still at home, but in some of the Science Fiction of the time, sexual equality was a reality.
We are still not there yet, and it looks like we are going backwards with the Fetal Personhood laws, and attacks on womans heath in the USA and the UK.
You have to wonder just how bad it can get, and so I did:- 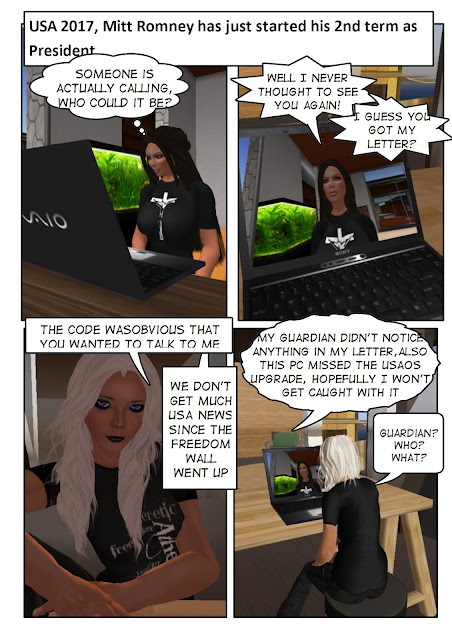 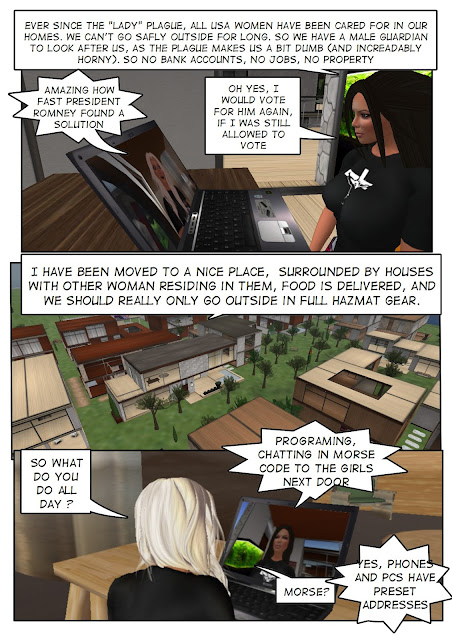 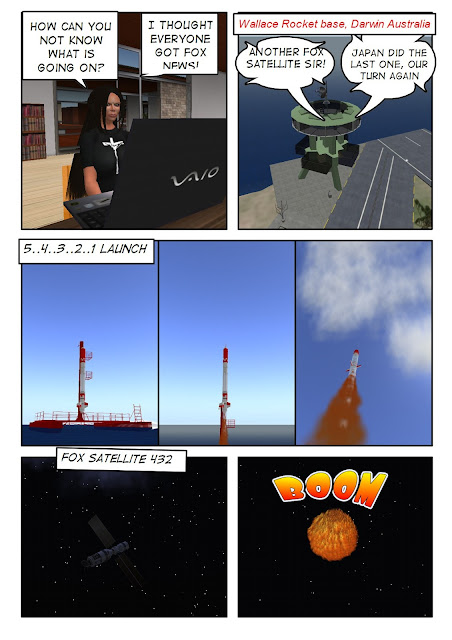 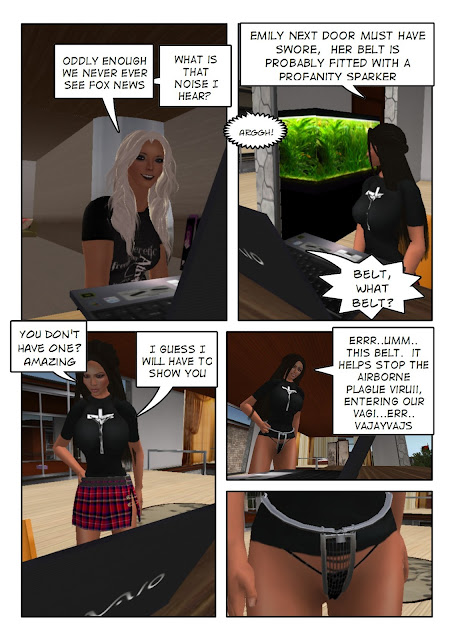 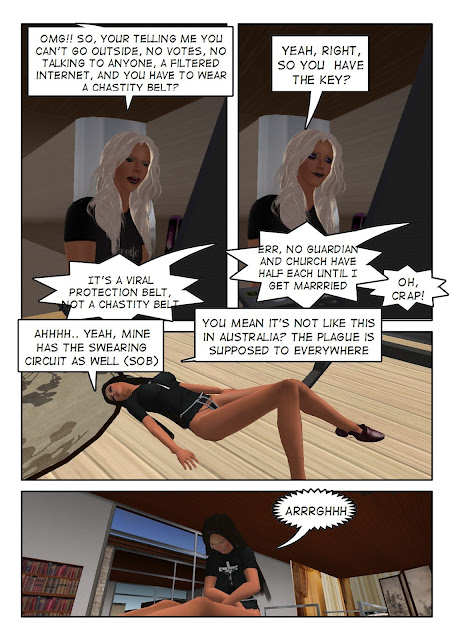 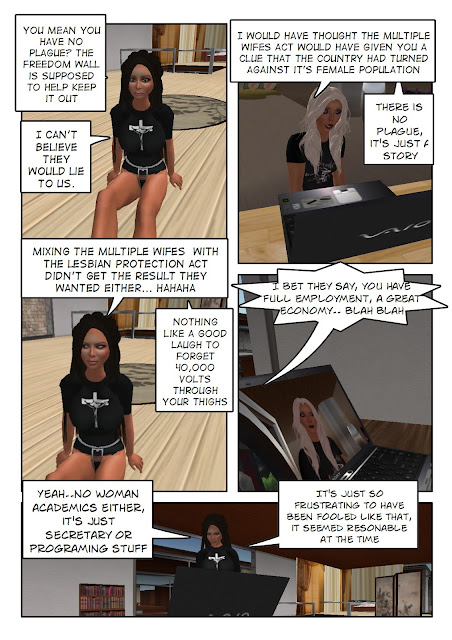 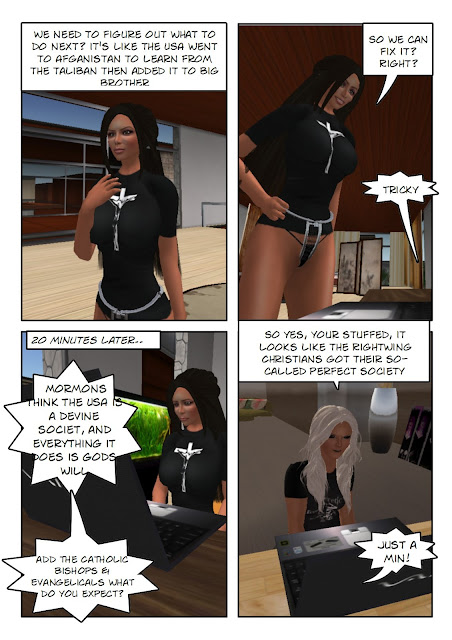 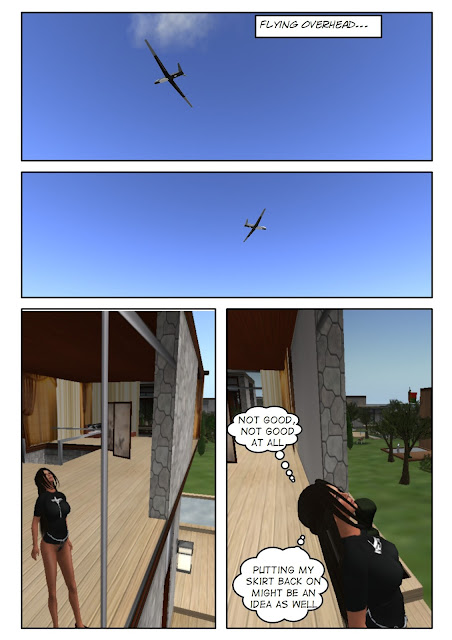 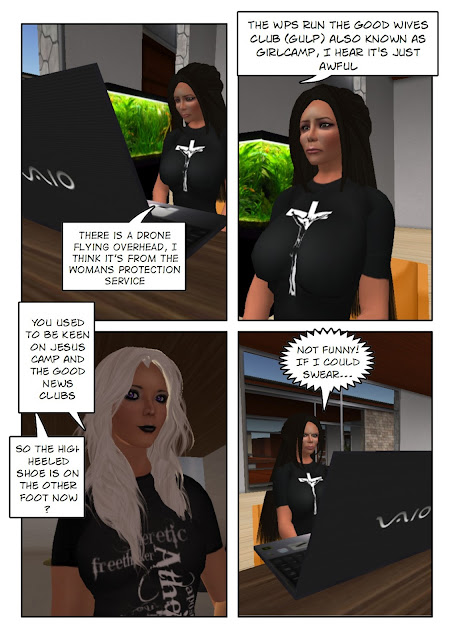 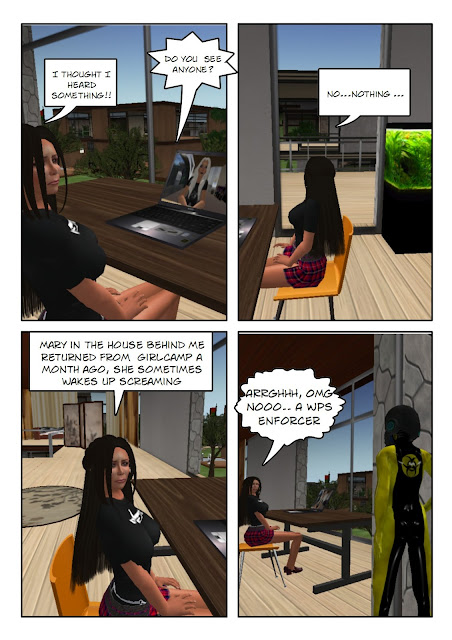 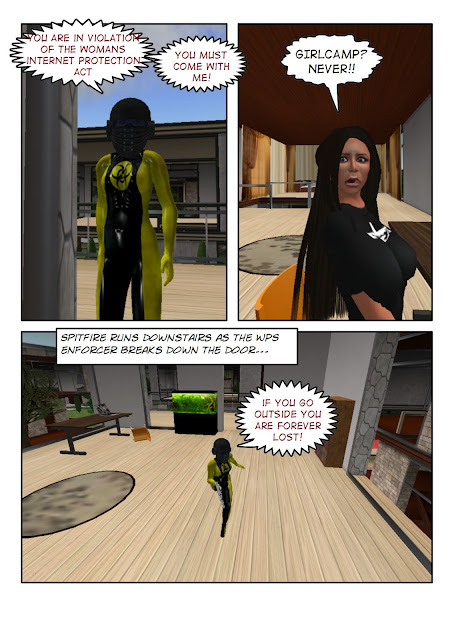 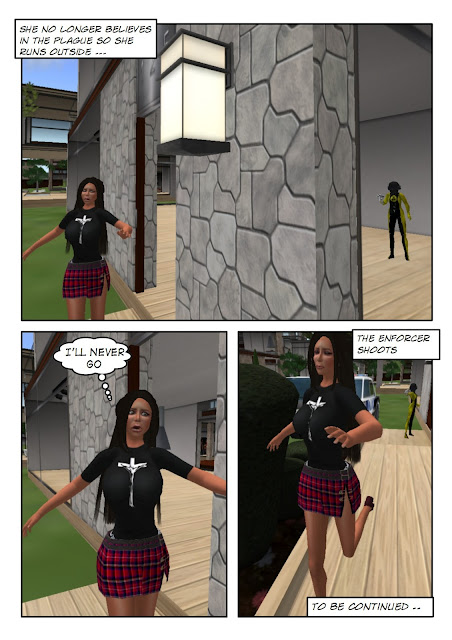 When women thrive, all of society benefits, and succeeding generations are given a better start in life. Kofi Annan
Posted by Shockwave Plasma at 6/09/2012 01:25:00 am No comments:

Jennifer Wilson has written something I have been trying to express for a while, it's that term "objectification". It's one of those terms that seems to be the catch all for something we don't like, but not sure why.
Read it here


"Today we need the humanities as much as ever, because we still need to cultivate our capacity for mutual respect, understanding and compassion, and this has always been the contribution that the humanities have made to education." Martha C. Nussbaum
Posted by Shockwave Plasma at 6/07/2012 01:36:00 am No comments: