US Commission on International Religious Freedom 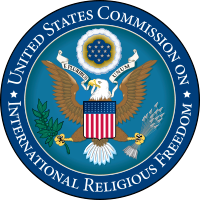 
I've never heard of this commission before, but then it's not really surprising, as there is so much stuff government do that nobody recognizes or utilizes, but as someone who watches the activities of the churches and religion it's still a bit odd. I asked on twitter if anyone else had heard of it, and only 1 person in about 7 US citizens did.

It's an independent body that investigates religious freedom in the world, just as the title says. I don't see anywhere on it site to say it covers freedom FROM religion, it's been around since 1998 and was formed with the passing of the US International Religious Freedom Act of 1998.

I am glad to see it sees Defamation of Religion as a dangerous move to move from people have human rights to religion having some sort of special protection.

What is very puzzling to me is that some of these pages on current issues have not been updated since 2009, such as the anti-antisemitism pages. It's almost as if they realised no one was actually visiting their site, and so stopped bothering. On the other hand the What's New page is updated with their activities

I'm also not sure how well the pages are fact checked as one page on Burma states how the commission met with the oppressed Buddhists, who actually are the majority. I suspect they met with the Muslims.

The Commission on International Religious Freedom issues an annual report every May 1, and has some quite interesting documents and reports on it's site, oddly enough most of the countries of concern are Muslim ones. Seems they doesn't really play nice with minority religions, and dare I say it, atheists.


The US State Dept has Office of International Religious Freedom

What is the difference between USCIRF and the State Department’s Office of International Religious Freedom?


USCIRF is an independent, bipartisan federal government entity, while the Office of International Religious Freedom (IRF) — also established under IRFA—is part of the U.S. State Department.  Both USCIRF and the State Department release annual reports on international religious freedom, but each has different purposes. The State Department's report documents religious freedom violations in every country in the world.  USCIRF’s Annual Report, by statute, recommends countries to be designated as “countries of particular concern” which the Executive Branch must consider.  The report also examines select countries, and while also documenting abuses, makes policy recommendations to the executive and legislative branches of government.  USCIRF’s report also comments on the effectiveness of the State Department’s efforts to promote international religious freedom.


So I still don't get why two of these Departments are needed? But I don't see the USCIRF as either a good or a bad thing, but somehow it just makes me uneasy. Maybe it's because as a atheist I see religion as a mental illness, and these organisations have been setup help propagate it, even though on the other hand it's possibly helping others to be free of tyranny.

I'll keep it bookmarked, it might produce something of interest every May.

USCIRF Wikipedia entry (Out of Date)

The ACLU has a few words about USCIRF

We will be a better country when each religious group can trust its members to obey the dictates of their own religious faith without assistance from the legal structure of their country. - Margaret Mead