This time last year I was rather depressed, and wondering what direction (if any) Second Life had for me. So I decided to retire.

I sold the land I had, stopped being Premium, and didn't log in to SL for many months. I made new accounts on social network sites, and got involved in some other, more idealistic things, and was trying to work towards the world being a better place.

After some reading of blogs and newgroups I realized there are powerful interest groups that I would be making comments about, and when job hunting, my CV and Google would quickly find my comments. Actually it was BastardSheep who made this point, and so I reworked and relaunched this blog as a platform for commentary and ideas.

In the last year I have met (online..well..you know..met, sort of) some clever intelligent people, and sometimes been able to make a small contribution to their projects. So for myself this year I made a goal to do something different/new/clever/useful everyday, and I have found it an inspiration to write, to take some pictures, to do some RL and some SL projects.

So in the last year I have covered Libel Reform, Anti-vaxxers, religion in schools, and I have more to come, I just type rather slow.

I have quite a few post in the drafts stage, and a jump off a high platform with an umbrella (pictures soon), and I'm testing to see how long it takes to make comics, plus a few hopefully funny pictures in the works.

A few days ago I made my own money, but only useable in Plasmaland Opensim. 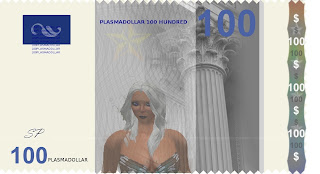 Now...I have just though of some more ideas to have fun with...

good luck with your endeavors for this new year =)

Thanks, I'm glad I'm still here, and have things I want to do.

I have been close a few times to leaving it all, but many people I have come across take a break, then find they have new ideas.