A token of affection 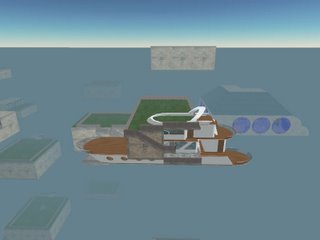 Well imagine my surprise when I teleported to my Sky Condo, it looked really strange and I thought I had picked the wrong one again.

So I teleported back to the ground. Tried again, hmmm waited for everything to rezz properly, and I realised that I was in the correct place. But things were looking a bit odd. I thought another sky box must have crashed into mine. So moving the camera out gave me a big surprise.

You can see, there was a great big boat embedded in my house.

As you might guess, it wasn't there when I left.

I called the landlord ( Cinda ) and asked her to have a look. She was rather impressed, as this was the biggest item she has ever removed. Qualifying that this is probably some token of affection from a secret admirer. We then debated the appeal of boats re flowers.
The privilege of feeling at home everywhere belongs only to kings, wolves and robbers. - Honore de Balzac
Posted by Shockwave Plasma at 11/04/2006 06:14:00 pm